There is no resting place for an
enterprise in a competitive economy.
- Alfred Pritchard Sloan

The Planet in transition: Engaging with the New Normal

The emerging Global Environment characterized by the increasing intensity of knowledge in our economic and business models, - do not present a singular set of challenges and/or uniform nature of opportunities to businesses and national governments; rather, they offer a range of complex and dynamic possibilities that are unique to each nation, and even to local communities/states or provinces within each country. Particularly as the world gets increasingly intertwined and dependent on finer and more powerful forces of nature such as nuclear, nano, photonic and/or genetic, - levels of technological uncertainty associated with economic advance will only increase – on one hand offering unprecedented opportunities, and on the other hand exposing nations/societies (less prepared) to major disruptions.

Coupled with this trend, the risks associated with escalating scale of natural disasters (e.g Tsunami in Fukushima), more frequent hurricanes, cyclones and Tornadoes, and man-made calamities such as the ones in Middle-east, are going to make the emerging environment in an evolving state of “heightened uncertainty”.

Furthermore, we see all around us today a rapid erosion of confidence in economic thoughts from the past. At a macroeconomic level, policy makers worldwide seem not to have the conviction that is required to make decisions and take actions that benefits all people– which offer equitable economic opportunities. Not surprisingly, in economically privileged regions of the world the youth of today are disheartened, adults are confused, and a few policy makers busy with justifying errors of judgments, while one third of the global population is struggling to keep their hopes alive fueled by $2/day of resources.

The breakdown of the Soviet Union and of the economic constructs of Eastern European in the early nineties, and the occupy Wall Street movement in 2007/2008, only underscore the limits of the two “isms” – Capitalism and Socialism, which economists have debated since the days of Karl Marx.

In such a state of global turbulence, in absence of strategic perspective at national level, policy makers seem to continually get mired into difficult situations, - often exposing the larger community to sudden economic, financial and/or political jolts which could have been avoided. In the process the trust people place on political leaders and the governance process within governments and businesses is systematically diminished.

Accordingly both on the supply and demand side of economic equations we need to change. Change we me must, not only for the short term by consuming less and/or by demanding more efficiency of what we use today, but also for the long term by inventing and putting in place processes that could fundamentally reconstitute our production and consumption instincts. Such changes cannot happen by simple linear extension of the current ways of being and economic thinking into the future; we must first envision a future with a zero base mind set, with eco-neutral resolve, and then work back from that vision to define the issues we must address today.

Time has come when leadership of governments (parliaments and senates), academia and businesses –large and small, need to step back and invent a governance process that will help different nations to benefit from the positive side of the possibilities ahead, while containing if not eliminating the risks that come with them.

Particularly, given the economic experiments in terms of liberalization and globalization and socio-economic ups and downs most of the nations, - both developed and emerging have gone through in the past 25 years, it is indeed an opportune time for leaderships of governments to revisit the fundamentals of what constitutes “country strategy” and then define a more dynamic path forward.

In order to do so a nation’s leadership from government, business and academia must find ways to embrace several essential imperatives, - in securing competitive advantage in select industries while ensuring socio economic advance, which is inclusive – enabling distributed wealth creation dynamic:

Movig forward, a nation’s leadership, irresepctive of its economic baises – capitalism or socialism, particularly given a nation’s geo-economic positioning, must rethink its long term possibilities, define a common vision – which industry & business, government and academia will agree to, and then determine how different regions of the nation could work with each other to resolve the common issues in a mutually rewarding and a commercially viable fashion. (Exhibit below)

Thought leaders from academia, governments and industry in each nation should come together to debate and discuss the above points toward envisioning a nation building process. A process that will enable inclusive economic development toward a more enlightened stewardship of geopolitical and geo-economics equations of our planet, and in turn advance the promise of our civilization. Accordingly, in helping policy makers shape & initiate socio-economic strategies (as a result economic and industrial policies) the framework below help us to structure our work with Governments often in support with Industry associations (Chambers of Commerce) and national think tanks (Universities included): 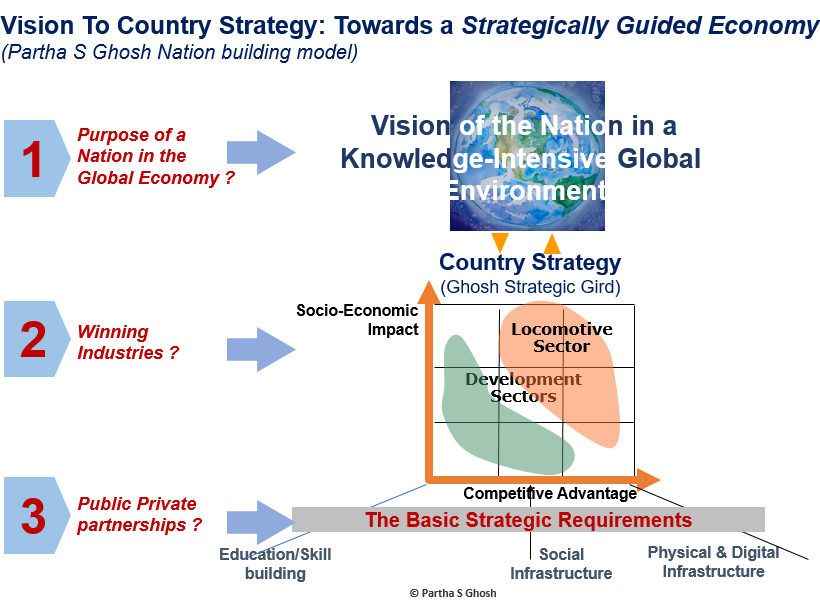 The world economy, influenced by the development of the knowledge based industries and the challenges of harmonizing “tera level” global imbalances in ethics, ecology and equity, has been in a “state of transition. We have to realize that the relevance of doctrines of economic thoughts that have emerged in very different environments (such as the first and second industrial revolutions) have become increasingly limited. We have reached a point in history when global economic realities have out-grown the economic laws that we have developed and debated over the past two centuries. We will need to operationalize the proposed “Country Strategy” model with a fresh mindset, with a spirit of inquiry that will help policy makers establish a more sustainable and equitable future.

A few articles, presentations and white papers are available below:

Time to embrace the New Spirit