In an era of knowledge explosion, we should have increasing opportunities to advance the socioeconomic promise of our civilization. It is only natural to expect that it should be relatively easier now to spread the “enthusiasm of learning” in creating “opportunities of economic growth”, and in helping organizations—corporate and government across communities and nations, to be wiser in their resolve and more genuine in their actions.

However, the unfortunate developments in the past several decades at both at the macro and micro levels, paint a different picture. At regular intervals we have experienced sudden economic jolts, - such as the sub-prime mortgage meltdown, the collapse of Enron, WorldCom and Shearson Lehman to name a few, followed by a major financial crisis in 2008, while the gap between rich and poor worldwide most importantly have continued to widen.

Every year conferences such as the one in Davos and the Clinton Global Initiative in New York bring together world leaders from different facets of life; yet the discussions appear to be increasingly “in reaction to” as opposed to being “proactive or predictive”. In the process for the larger segment of the global community the discussions in such leadership forums seem to be irrelevant, as the nobler motives get continually overshadowed with more powerful destructive forces – forces that are products of human selfishness, undisciplined and corrupted ethics of decisions, and above all greed for power and wealth.

The trust people place on leaders from academia, business and government, has been compromised. Perhaps we need to examine and rethink the measures of success that leaders value, - which today are highly limited by economic equations of the past, and constrained by lower level human instincts. It is especially true if decisions are made purely on the basis of individual greed and/or short sightedness to secure quick applause, these decisions permanently scars the “trust” and “integrity” on which modern economic systems have been built.

Individuals in leadership roles must realize that their power to influence great deeds and great thoughts in society is significantly more (in orders of magnitude) than they imagine. Our difficulties as human beings to make the right judgment calls are being limited by two fundamental factors:

No wonder, we see all around us today a rapid erosion of confidence in economic thoughts from the past. At a macroeconomic level, policy makers worldwide seem not to have the conviction that is required to make decisions and take actions that benefits all people– which offer equitable economic opportunities. Not surprisingly, in economically privileged regions of the world the youth of today are disheartened, adults are confused and faced with justifying errors of judgments, while one third of the global population is struggling to keep their hopes alive fueled by $2/day of resources.

The breakdown of the Soviet Union in the early nineties and the occupy Wall Street movement in 2007/2008, only underscore the limits of the two “isms” – Capitalism and Socialism, economists have debated since the days of Karl Marx.

Accordingly both on the supply and demand side of economic equations we need to change. Change we me must, not only for the short term by consuming less and/or by demanding more efficiency of what we use today, but also for the long term by inventing and putting in place processes that could fundamentally reconstitute our production and consumption instincts. Such changes cannot happen by simple linear extension of the current ways of being and economic thinking into the future; we must first envision a future with a zero base mind set, with eco-neutral resolve, and then work back from that vision to define the issues we must address today.

We must vigorously rethink what constitutes the “Arts & Science of Economics” with as much vigor as physicists and chemists continually challenged earlier laws to develop deeper understanding of the forces of nature.

Particularly when it comes to the discipline of Economics, we must realize that the interactions between individuals, between societies, between nations are significantly more complex and are in a continuous state of flux. These interactions, - sometimes rational often irrational, are influenced by the relative differences in ethics, education and experience of all of their participants. As much as Einstein and Plank changed our thoughts in physics, and Bose changed our understanding of what defines the fundamental particle, perhaps the time has come when the discipline of Economics need to be reimagined with a wider and deeper perspective on the nature of humans, and way the choices are structured and made, individually and collectively, not only for self preservation or to serve self interest, -but also for the advancement of social conscience.

Partha has an unusually imaginative and creative mind and has contributed a lot to the thinking about the Asia Pacific region.
- Jim Kennan, Deputy Premier, Queensland, Australia

Moving forward in making the discipline of economics more relevant for the future of civilization, to serve those who are marginalized as well as those who are in the center stage, businesses and governments have to pay attention to several fundamentals:

1. The “power of human intellect and knowledge” will increasingly emerge as the most powerful influence in defining the architecture of the new economic equations. In particular, as shown in the exhibit below “Human intellect” as an independent component will influence the deployment of capital, natural resources, and labor, in expanding the economic possibilities across nations. 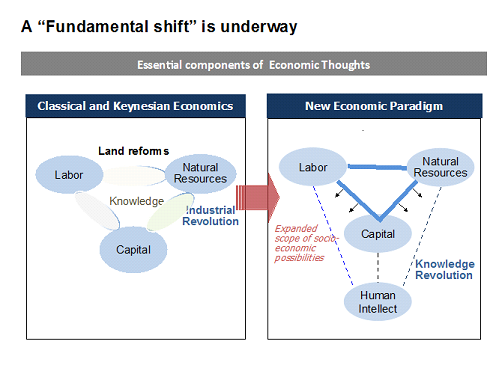 2. At macroeconomic level, economists as a result, instead of just debating along one vector - where the power resource allocation should be located, - government or market (?), as shown in the exhibit below, they should also include two more vectors for expanding the scope of policies that could be more effective in facilitating socio-economic gains: - (i) What should be the content of the power – strategic versus operational (?), and (ii) How should the power engage (in terms of incentives and regulations) with people and with systems/institutions in the economy(?). 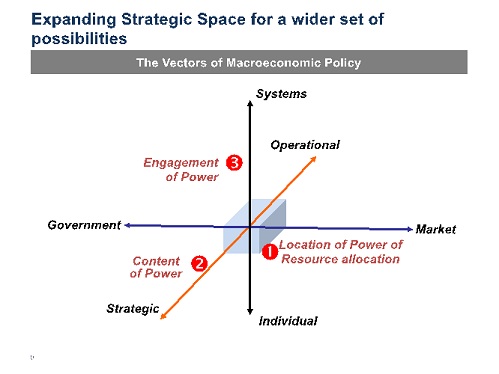 3. In the same spirit as shown in the exhibit below, at micro-economic level businesses have to engage with the 21st century economy, in ways that are fundamentally different from the past. 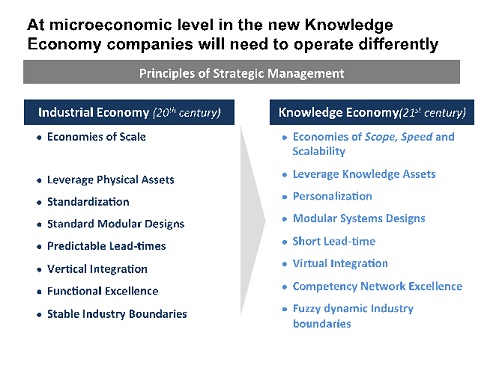 Too often because of the lack of understanding of the nature of constraints that suffocate our thinking, the leadership of organizations thought processes and decisions are shaped by the constructs of the past. In turn we fail to relate with the mega-shifts and we appear feeble in coming to terms with “course correction” that advancement of civilization requires. The Arts & Science of Economics will need to integrate lessons from three streams of thought processes: (i) physical sciences to define cause-effect relationships (ii) Behavioral/Psychological discipline to understand how social intelligence is formed in various cultures and in turn helps or hurts progress and (iii) philosophy to reflect on how codes of ethics and reasoning, morality and integrity influence socio-economics outcomes.

I found Partha to be an innovative, forward looking thinker with a deep-rooted desire to make a positive impact on the task at hand. He brings a unique perspective to issues, a result of the diverse work that he has undertaken across the Globe.
- Mr. Ratan Tata, Chairman of the Tata Group

The current global economic uncertainties in the midst of accelerating imbalances in the 3Es, - Energy, Ecology and Equity while unwelcome, indeed offers an opportune time for us to step back and explore how the fundamental backbone of the interconnected global economy could be reinvented, and how our basic conscience that drives our consumption and resource allocation behavior could be reshaped and repurposed.

This reinvention of the future must help humanity to facilitate a new relationship between human and nature, which is not extractive but enriching, which is not consumption centric but conservation centric. In the process social and economic structures will need to be reconfigured so that resource allocation processes will become more distributed and decentralized and the value addition model could move from being linear to circular, possibly giving birth to new form of capitalism which I call “cellular capitalism”.

I was greatly impressed by the way Partha combined his vast experience and knowledge about the macro, sectoral and micro levels of issues with his superior analytical ability. Another of his outstanding attributes is his ability to build strong relationships and lines of communication with representatives of diverse segments of civil society.
- Bülent Eczacıbaşı, Chairman, Eczacıbaşı Group

Only, such an approach will give birth to a full range of new concepts of community, education, governance, health care, industry and work, which will open up new wealth creation and employment possibilities that could not only offset the ill effects of the meltdown (economic and environmental) but create new growth pathways to draw significantly more people from under privileged economic backgrounds into the global market place.

Now we need bigger ambition beyond our own requirements. We must cultivate the inner courage and conscience to inspire individuals, organizations and societies to perform beyond the ordinary in strengthening the basic fabric of humanity..
Nobler motives should be our strongest motives. As more commodities are produced each individual must not become commoditized but instead valued for his/her inner charm. Let this new “Art and Science of Economics” lead us to toward a world beyond capitalism and socialism, as we know them, which over the past ten-to fifteen years, I have been calling “cellularism” or “x” ism?

A few articles, presentations and white papers are available below:

In addition, more on Economic program is available in the link below:

The Future of the Global Economy